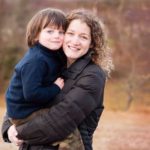 Emily Loeb’s interest in yoga peaked after giving birth to her third child in 2009. Yoga became a refuge from both the pressures and demands of motherhood as well as working. She developed a strong personal practice; finding herself particularly drawn to the meaning and depth of yoga’s rich and ancient history.

Emily is an E-RYT 500, having completed both her 200 and 300 hour teacher training at The Funky Om in Huntington. She currently teaches at several local studios. A former book editor, she also works as a freelance writer for several local publications. Immensely grateful for her teachers, Emily considers herself a lifelong student and continues to immerse herself in yoga workshops and classes whenever she can.